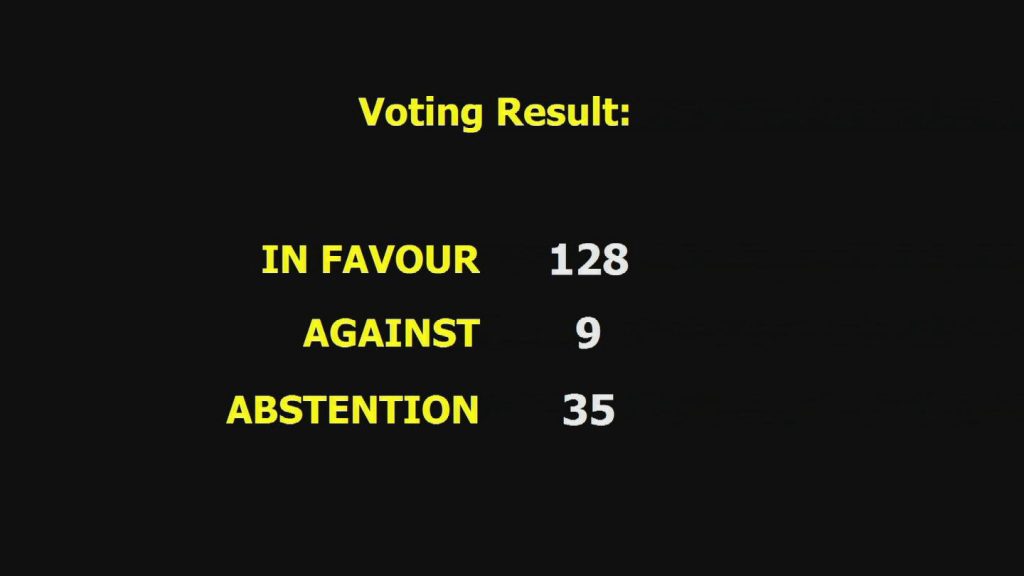 Member States in the United Nations General Assembly have demanded that all countries comply with Security Council resolutions regarding the status of Jerusalem.

Through a resolution adopted on Thursday (21 Dec 2017) by a recorded vote of 128 in favour to nine against, with 35 abstentions, the 193-member Assembly expressed deep regret over recent decisions concerning the status of Jerusalem and stressed that the Holy City “is a final status issue to be resolved through negotiations in line with relevant UN resolutions.”

Palestinian Foreign Minister Riyad al-Maliki told the Assembly that the decision by the United States (US) to move its embassy to Jerusalem “will not impact the status and position of the holy city whatsoever, rather, it naturally affects the status of the United States as a mediator of peace.”

US Ambassador Nikki Haley opposed the resolution and said that “when we make generous contributions to the UN, we also have a legitimate expectation that our good will is recognized and respected. When a nation is singled out for attack in this organization, that nation is disrespected. What’s more, that nation is asked to pay for the “privilege” of being disrespected. In the case of the United States, we are asked to pay more than anyone else for that dubious privilege.”

Haley said that the US decision “does not prejudge any final status issues, including Jerusalem’s boundaries. The decision does not preclude a two-state solution, if the parties agree to that. The decision does nothing to harm peace efforts. Rather, the President’s decision reflects the will of the American people and our right as a nation to choose the location of our embassy. There is no need to describe it further.”

Israeli Ambassador, Danny Danon, thanked “those brave countries that do not support this resolution.”

He said “you are the defenders of peace. You are the leaders who prove that no UN resolution can rewrite history.”

Danon said “violence and terror must never be tolerated. If this body were really united for peace, it would pass a resolution condemning Palestinian violence. When the United Nations adopts a resolution as absurd as this, it does more than eliminate peace. It welcomes hypocrisy. But that’s not all. This resolution encourages more violence and instability. For years, Palestinian leaders have pledged to keep fighting until Jerusalem was in their hands. They publicly denied the very existence of our temples in Jerusalem. With this dangerous resolution, you have sanctioned the Palestinians to continue on this dangerous path.”

India voted in support of the resolution which means India went against the US stand on Jerusalem.

Action in the Assembly today follows a failed attempt by the Security Council on Monday adopt a similar text reflecting regret among the body’s members about “recent decisions regarding the status of Jerusalem,” with a veto from the United States, a permanent member of the Council.