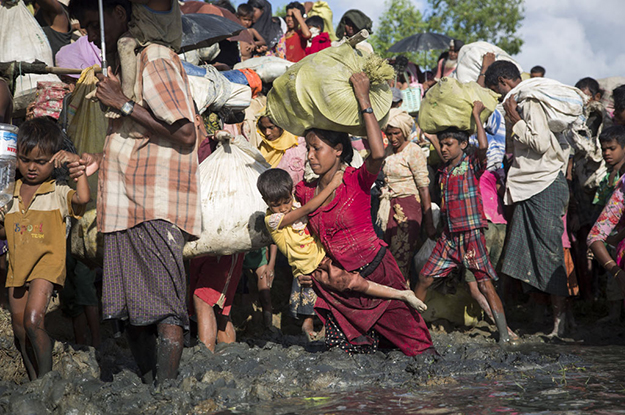 Brutal attacks against Rohingya in northern Rakhine State have been well-organised, coordinated and systematic, with the intent of not only driving the population out of Myanmar but preventing them from returning to their homes, a new UN report based on interviews conducted in Bangladesh has found.

The report by a team from the UN Human Rights Office, who met with the newly arrived Rohingya in Cox’s Bazar from 14 to 24 September 2017, states that human rights violations committed against the Rohingya population were carried out by Myanmar security forces often in concert with armed Rakhine Buddhist individuals.

The report, released on Wednesday, 11 October, is based on some 65 interviews with individuals and groups.

It also highlights a strategy to “instil deep and widespread fear and trauma – physical, emotional and psychological” among the Rohingya population.

More than 500,000 Rohingya have fled to Bangladesh since the Myanmar security forces launched an operation in response to alleged attacks by militants on 25 August against 30 police posts and a regimental headquarters.

The report states the “clearance operations” started before 25 August 2017, and as early as the beginning of August.

The UN Human Rights Office is gravely concerned for the safety of hundreds of thousands of Rohingya who remain in northern Rakhine State amid reports the violence is still ongoing, and calls on authorities to immediately allow humanitarian and human rights actors unfettered access to the stricken areas.

The report cites testimony from witnesses that security forces scorched dwellings and entire villages, were responsible for extrajudicial and summary executions, rape and other forms of sexual violence, torture and attacks on places of worship. Eyewitnesses reported numerous killings, saying some victims were deliberately targeted and others were killed through explosions, fire and stray bullets.

A 12-year old girl from Rathedaung township described how “the [Myanmar security forces and Rakhine Buddhist individuals] surrounded our house and started to shoot. It was a situation of panic – they shot my sister in front of me, she was only seven years old. She cried and told me to run. I tried to protect her and care for her, but we had no medical assistance on the hillside and she was bleeding so much that after one day she died. I buried her myself.”

The report states that in some cases, before and during the attacks, megaphones were used to announce: “You do not belong here – go to Bangladesh. If you do not leave, we will torch your houses and kill you.”

Credible information indicates that the Myanmar security forces purposely destroyed the property of the Rohingyas, targeting their houses, fields, food-stocks, crops, livestock and even trees, to render the possibility of the Rohingya returning to normal lives and livelihoods in the future in northern Rakhine almost impossible.

He also urged the Myanmar Government to immediately end its “cruel” security operation.

“By denying the Rohingya population their political, civil, economic and cultural rights, including the right to citizenship, he said, the Government’s actions appear to be “a cynical ploy to forcibly transfer large numbers of people without possibility of return.”

The report indicates that efforts were taken to effectively erase signs of memorable landmarks in the geography of the Rohingya landscape and memory in such a way that a return to their lands would yield nothing but a desolate and unrecognizable terrain.

Information received also indicates that the Myanmar security forces targeted teachers, the cultural and religious leadership, and other people of influence of the Rohingya community in an effort to diminish Rohingya history, culture and knowledge.